skip to main | skip to sidebar

...the library I am sitting in is closing as I type this. However I wanted to just give everyone a heads up that I, along with a friend of mine and fellow activist (I use this term loosely on my part), did some lobbying with the Armenian National Committee in Sacramento on the 21st of April. I will write about why we were there and what went on very soon, I promise!
Posted by Sukhumtsi at 11:44 PM No comments:

I really want to get into this topic but life is a bit hectic right now so I will leave you with this video clip from Al-Jazeera.

Posted by Sukhumtsi at 10:19 PM No comments:

Why this Administration is not working for the Armenian community- ANCA

I apologize if it seems as though most of my latest posts are straight out of the ANCA Newsletters but I do believe that they include important information that needs to be put out there. More coverage can be found on the ANCA website.

2) Opposition to the Congressional Genocide Resolution
The Bush Administration, throughout its tenure, has actively sought to block the adoption of the Genocide Resolution in both the House and Senate. As recently as October of last year, the President spoke to the national media from the White House, on more than one occasion, against the recognition of the Armenian Genocide, and personally lobbied Members of Congress to prevent the commemoration of this crime.

3) The Evans firing and the Hoagland nominations
The Bush Administration fired U.S. Ambassador John Evans, a career Foreign Service officer with 35 years of experience, simply for speaking truthfully about the Armenian Genocide. Despite numerous Congressional inquiries, his Administration continuously attempted to cover up the true reasons for Evans’ removal and the Turkish government’s protests over his statements. When the American Foreign Service Association (AFSA) awarded John Evans the Christian Herter prize for constructive dissent, Administration officials forced AFSA to rescind the award just days before Turkish President Erdogan came to Washington, DC to meet with President Bush.
The President’s nominee to replace Ambassador Evans, Dick Hoagland, denied the Armenian Genocide in response to Senate inquiries during his confirmation process. After being blocked by a Senatorial “hold” placed by Robert Menendez in the 109th Congress, the President again nominated Ambassador Hoagland, only to have this nomination blocked once again on the grounds that a diplomat who denies the Armenian Genocide cannot serve effectively as the U.S. representative to Armenia.

4) The Waiver of Section 907 of the Freedom Support Act
The Bush Administration, in 2001, aggressively pressured Congress into granting the President the authority to waive Section 907, a provision of law that bars aid to the government of Azerbaijan until it lifts its blockades of Armenia and Nagorno Karabagh. President Bush has subsequently used this authority to provide direct aid, including military assistance, to the government of Azerbaijan, despite their continued violation of the provisions of this law.

5) Reduction in aid to Armenia
In the face of the devastating, multi-billion dollar impact of the Turkish and Azerbaijani blockades on the Armenian economy, President Bush has, in each of his years in office, proposed to Congress that Freedom Support Act humanitarian and developmental aid to Armenia be reduced.

6) Abandonment of the Military Aid Parity Agreement
The Bush Administration abandoned its November 2001 agreement with Congress and the Armenian American community to maintain even levels of military aid to Armenia and Azerbaijan. In successive budgets submitted to Congress, the President effectively sought to tilt the regional military balance in favor of Azerbaijan, undermining the role of the U.S. as an impartial mediator, despite Azerbaijan's increasingly violent threats of renewed aggression.

7) Mistaken Listing of Armenia as a Terrorist Country
The Bush Administration sought, unsuccessfully, in December of 2002 to place Armenia on an Immigration and Naturalization Service watch list for terrorist countries. This obvious error was reversed only after a nation-wide protest campaign. Neither the White House nor the Department of Justice has apologized for the offense caused by this mistake.

8) Lack of U.S.-Armenia Presidential visitations
The President neither visited Armenia nor did he invite the President of Armenia to visit the United States, despite similar visits by the leaders of Georgia and Azerbaijan.

10) Taxpayer financing of the Baku-Ceyhan bypass of Armenia
The Bush Administration supported American taxpayer subsidies for the politically motivated Baku-Ceyhan pipeline route that, at the insistence of Turkey and Azerbaijan, bypassed Armenia.

Posted by Sukhumtsi at 9:24 PM No comments:

Thank you to who ever it was that posted my blog in San Diego's craigslist.

Statement of Senator Hillary Clinton on the U.S.-Armenia Relationship

Alone among the Presidential candidates, I have been a longstanding supporter of the Armenian Genocide Resolution. I have been a co-sponsor of the Resolution since 2002, and I support adoption of this legislation by both Houses of Congress.

I believe the horrible events perpetrated by the Ottoman Empire against Armenians constitute a clear case of genocide. I have twice written to President Bush calling on him to refer to the Armenian Genocide in his annual commemorative statement and, as President, I will recognize the Armenian Genocide. Our common morality and our nation’s credibility as a voice for human rights challenge us to ensure that the Armenian Genocide be recognized and remembered by the Congress and the President of the United States.

If the mass atrocities of the 20th Century have taught us anything it is that we must honestly look the facts of history in the face in order to learn their lessons, and ensure they will not happen again. It is not just about the past, but about our future. We must close the gap between words and deeds to prevent mass atrocities. That is why I am a supporter of the Responsibility to Protect. As President, I will work to build and enhance U.S. and international capacity to act early and effectively to prevent mass atrocities. The Bush administration’s words of condemnation have not been backed with leadership to stop the genocide in Darfur. I support a no-fly-zone over Darfur. I have championed strong international action to ensure that the government of Sudan can no longer act with impunity, or interfere with the international peacekeeping force, which is essential for the protection of the people of Darfur.

I will, as President, work to expand and improve U.S.-Armenia relations in addressing the common issues facing our two nations: increasing trade, fostering closer economic ties, fighting terrorism, strengthening democratic institutions, pursuing our military partnership and deepening cooperation with NATO, and cooperating on regional concerns, among them a fair and democratic resolution of the Nagorno-Karabagh conflict. As President, I will expand U.S. assistance programs to Armenia and to the people of Nagorno-Karabagh.

I look forward, as President, to continuing to work with the Armenian-American community on the many domestic and international challenges we face together, and to build on the strong foundations of shared values that have long brought together the American and Armenian peoples.

Posted by Sukhumtsi at 1:52 PM No comments:

While using Good Search to get some research done on Armenian NGO's while helping the ANCA raise money, I came across this section of ArmeniaNow.com that just really got to me. It reminded me of why I wanted to go to Armenia in the first place. My desire to go to Armenia went from wanting to go out there to help out in some way, shape, or form in the villages that I have heard so much about from my family to wanting to work within the government or media outlets (this is mainly because a member of my family is pretty influential in those areas and I would be taken care of). However, this collection of articles, or more appropriately, stories, really touched me and I feel more motivated than ever to make that journey.

I urge you to read these stories as well...

Obama on the Importance of Armenia-US Relations

Barack Obama on the Importance of U.S.-Armenia Relations 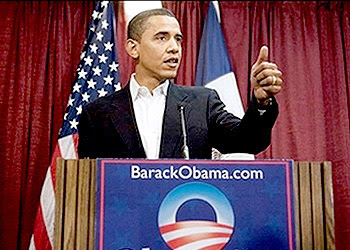 I am proud of my strong record on issues of concern to the one and a half million Americans of Armenian heritage in the United States. I warmly welcome the support of this vibrant and politically active community as we change how our government works here at home, and restore American leadership abroad.

I am a strong supporter of a U.S.-Armenian relationship that advances our common security and strengthens Armenian democracy. As President, I will maintain our assistance to Armenia, which has been a reliable partner in the fight against terrorism and extremism. I will promote Armenian security by seeking an end to the Turkish and Azerbaijani blockades, and by working for a lasting and durable settlement of the Nagorno Karabagh conflict that is agreeable to all parties, and based upon America's founding commitment to the principles of democracy and self determination. And my Administration will help foster Armenia's growth and development through expanded trade and targeted aid, and by strengthening the commercial, political, military, developmental, and cultural relationships between the U.S. and Armenian governments.

I also share with Armenian Americans – so many of whom are descended from genocide survivors - a principled commitment to commemorating and ending genocide. That starts with acknowledging the tragic instances of genocide in world history. As a U.S. Senator, I have stood with the Armenian American community in calling for Turkey's acknowledgement of the Armenian Genocide. Two years ago, I criticized the Secretary of State for the firing of U.S. Ambassador to Armenia, John Evans, after he properly used the term "genocide" to describe Turkey's slaughter of thousands of Armenians starting in 1915. I shared with Secretary Rice my firmly held conviction that the Armenian Genocide is not an allegation, a personal opinion, or a point of view, but rather a widely documented fact supported by an overwhelming body of historical evidence. The facts are undeniable. An official policy that calls on diplomats to distort the historical facts is an untenable policy. As a senator, I strongly support passage of the Armenian Genocide Resolution (H.Res.106 and S.Res.106), and as President I will recognize the Armenian Genocide.

Genocide, sadly, persists to this day, and threatens our common security and common humanity. Tragically, we are witnessing in Sudan many of the same brutal tactics - displacement, starvation, and mass slaughter - that were used by the Ottoman authorities against defenseless Armenians back in 1915. I have visited Darfurian refugee camps, pushed for the deployment of a robust multinational force for Darfur, and urged divestment from companies doing business in Sudan. America deserves a leader who speaks truthfully about the Armenian Genocide and responds forcefully to all genocides. I intend to be that President.

I look forward, as President, to continuing my active engagement with Armenian American leaders on the full range of issues of concern to the Armenian American community. Together, we will build, in new and exciting ways, upon the enduring ties and shared values that have bound together the American and Armenian peoples for more than a century.

Posted by Sukhumtsi at 9:33 AM No comments: